After shamelessly plugging my ANCHOR typeface on the web forum of The Mausoleum Club, I was delighted that it sparked off a very interesting conversation.

However one user going by the name of Boblet commented, quite correctly:

Dave…hang on, isn’t there supposed to be a rectangular block as one of the characters? How am I supposed to recreate Mentalis’ countdown sequence from The Armageddon Factor now? 🙂
http://www.mausoleumclubforum.org.uk/ Retrieved 29 September 2009

The problem was that I hadn’t seen the BBC Engineering Monograph 84 that shows a selection of ANCHOR characters when I originally created the font back in 2006, so I didn’t know I needed to add a block character. 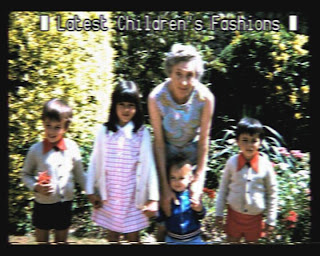 With blocks you can do thrilling things like this!

As I thought it was only going to be a five minute job (if only I’d have known…) I thought I’d add one. What I needed to do should have been very simple: add a solid black rectangle to the Unicode character position known as “U+2588 FULL BLOCK”.

I originally created the font in Fontographer, but I’m using FontForge these days – I don’t even have my copy of Fontographer in the country! I had my .fog file from when I originally created the font in Fontgrapher, but FontForge can’t do anything with these. Luckily I could load in my .ttf into FontForge and answer angelically in the affirmative when it asked me very sternly if I really had permission to play with the typeface.

However, whenever I scrolled down to alter FULL BLOCK FontForge crashed every time. It simply disappeared in a puff of smoke without any warning or error whatsoever. My version of FontForge from the Ubuntu repository was well nearly 18 months old, which is an age for a program under constant development. Font Forge is worked on so much its version numbers are given as dates and times.

So I decided to so something quite drastic – I’d download a source tarball of FontForge from Sourceforge and compile and build the very latest version from the source. As I am using Ubuntu Linux this sort of thing is very easy. In theory, anyway…

Because I use IDLE and Python regularly I had all the odds and ends installed that I needed to compile something from source. According to the instructions, I just needed to type four commands on the command line and I’d be finished.

Stunningly, it all worked beautifully and I now have a shiny new latest model version of FontForge – a mere baby at only six days old when I downloaded it. 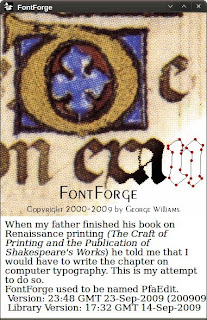 Fresh as a daisy – only six days old

And, as an added bonus, the user interface now looks like it was created in 2003 instead of 1986. Although still rather black and white, it is all anti-aliased and looking very pretty. 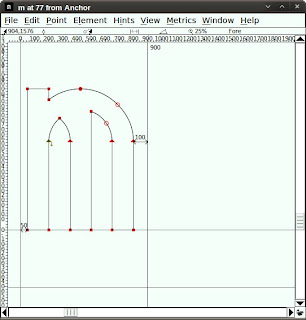 The interface is looking much more modern

Adding the block character to Anchor took ten blissful crash-free seconds and I have now uploaded the latest version of the font, version 4, to here.