My one stop shop for all your stupid rubbish download needs is now open here.

So now, for the first time everyone can:

And all in the comfort of your own home. How can you resist? I just hope Google’s servers are load balanced…

With the addition of things like filters, the boundary between vector art and bitmap art is getting fuzzier and fuzzier all the time.

To put this to the test, I decided to have a go at recreating in Inkscape something that was done on card using an airbrush to see if I could create a piece of vector art entirely in SVG format that looked like a piece of bitmap art. The piece of artwork I decided to use was taken from the Central Independent Television styleguide (many thanks to Roddy Buxton for giving me a scan of his copy), and is their colour logo from 1982. The most useful thing about the style guide illustration is that it contains a grid, precisely so that other people (like me!) can reproduce the artwork from scratch at a future date if necessary. 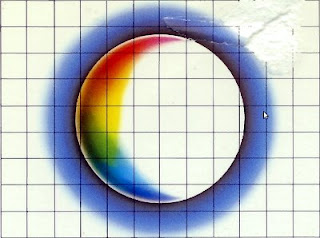 The original image, taken from Central style guide
The version of Inkscape I used was an early build of 0.47. The first thing I tackled was the border around the sphere. To be honest, it was the centre of the sphere I really wanted to tackle, so I didn’t spend much time on this at all, and did it as two gradient fills (blue and black) one on top of the other. I may well go back and revisit this at some stage.

The next job was to tackle the first colour. I started with the blueish red at the top of the sphere, and drew the rough shape of the red as a vector shape: 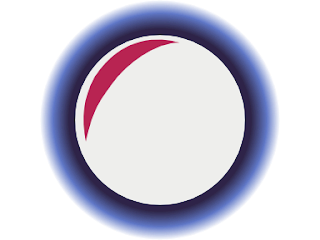 Then I applied a filter. I made my own filter, which I imaginatively called “central” to do this. The results are shown below. 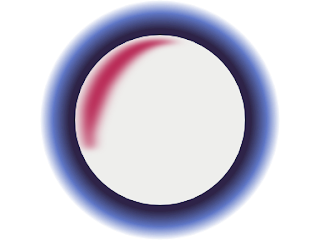 As you can see below, my filter is actually nothing more than a Gaussian Blur. 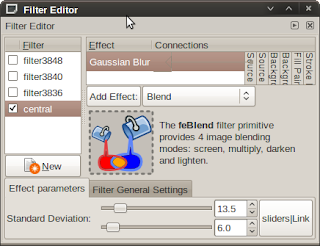 This is where all the magic takes place

The “air brush” effect I was after comes from the Standard Deviation, which makes the softness slightly random.

Next I added yellow, on a separate layer, and applied my “central” filter. However, it doesn’t quite look right. 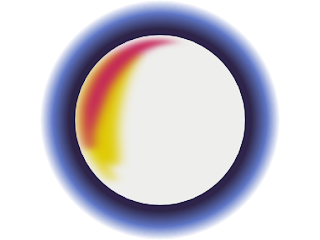 Yellow added on a separate layer

The trick here is to use “Multiply”‘ to Blend Mode to blend the layers containing colours together. Then the yellow mixes with the red to make orange: 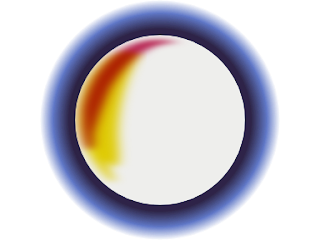 Then, if you carry on for light blue and purple (you only need four colours) then you get the familiar Central coloured sphere logo. So there you have it, an “air brushed” Central logo which is entirely described in an SVG file. 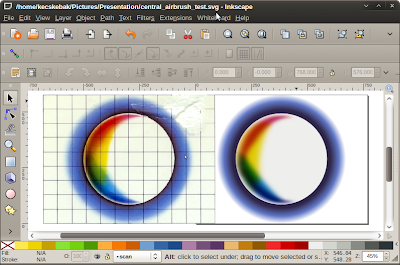 Scan on the left, my entirely vector SVG version on the right
And of course, the nicest thing is the entire logo SVG is only 9.3Kb – and that’s uncompressed and without the Inkscape editor information removed! 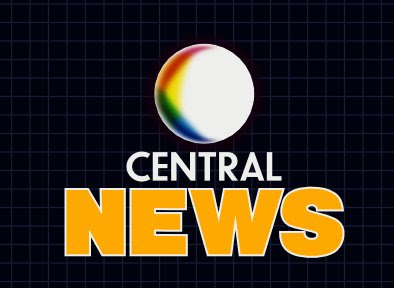 Now I can have fun making captions like this one