As I’m English, I thought I’d celebrate today with a video of my choice – my daughter speaking very good English even though she hasn’t been there since she was eighteen months old:

But I suspect people reading this blog will be more interested in the first part of the video.

I’ve been playing with doing more work in widescreen in the past couple of years. The reason is simply that watching pillar boxed stuff annoys me. I always used to hate those letterboxed films they showed on BBC2 for film buffs with magnifying glasses when I was a kid. So as 4:3 televisions are becoming harder and harder to find and I have a 16:9 monitor I’ve been animating everything in 16:9 for the past couple of years – perversely I’ve got DVD’s full of 16:9 presentation I’ve done in Flash from the 50s, 60s and 70s. 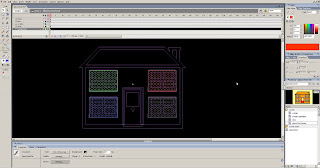 I animated the Playschool house animation from scratch in Macromedia Flash 8 and the BBC 1 South West globe in Swift 3D v5.0 – both at 720 x 576 for use as anamorphic 16:9 in Adobe Premiere Elements. The video was filmised in VirtualDub using the MSU Old Cinema plug in. I hope to have an example Flash animation of some kind filmised using OpenShot on GNU/Linux (I’ll probably be on Fedora 13 by then) to compare this against soon – the options for filmising your work on this look very promising indeed. 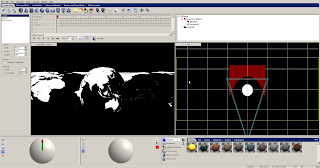 The BBC1 South West globe was animated at 50 frames per second, and I used that to create an interlaced 50 fields per second file in VirtualDub. The colour was keyed on in Adobe Premiere Elements. The announcement is actually Peter Macann (former Tomorrow’s World presenter) and was from BBC1 South in Southampton.

The BBC1 caption was traced in Macromedia Flash 8 from a scan of the original BBC1 globe caption from BBC Graphic Designer Bob Richardson.

The Playschool music (the definitive Paul Reade version) has a voice over from the magical Brian Cant and the day is given to us by Australia’s finest singer, Don Spencer.