Mountain Panic is a new arcade adventure for the BBC Micro based on At the Mountains of Madness, a novella by H.P. Lovecraft. It’s being programmed by Dave Footitt for Retro Software, and it’s shaping up to be really quite something.

And it’s not only the game that’s stunning. The cover artwork by Roger Coe and Chris Hogg is as well. So stunning in fact that Dave Moore of Retro Software naturally wanted to produce an A2 poster of it to use at the Byte Back retro gaming show that took place at Stoke-on-Trent in March. 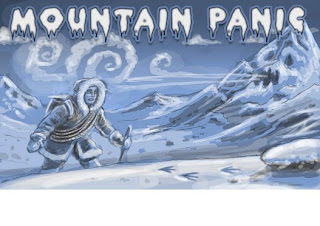 However the artwork presented Dave with a number of difficulties. It was a 1053 x 744 png file, which was too low a resolution for an A2 poster. Although the painting actually scaled well, the lettering didn’t work at all scaled up to A2 – and it was burnt into the image. So he asked me if there was anything I could do.

After I had a look at the image, I decided the only thing to do would be to create the Mountain Panic lettering as an .svg, which would allow its use at any size, and paint out the lettering on the original artwork in The GIMP.

The Mountain Panic lettering was easy to produce in Inkscape; basically it was a simple hand tracing job.

Lettering in vector format in Inkscape

Then I turned to the painting – it took me a couple of hours to paint out the Mountain Panic lettering in The GIMP. The hardest part was painting out the letter C that went over the mountain. Dave also asked me to extend the image downwards to the extent of the A2 page as well. 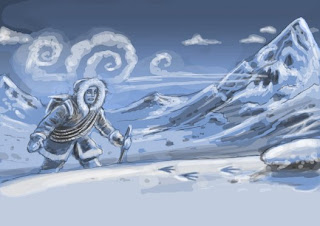 Lettering all painted out in The GIMP

You can download a demo of Mountain Panic that will work on a BBC Micro emulator (or a real BBC Micro!) from the Retro Software website. 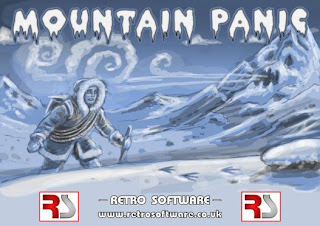