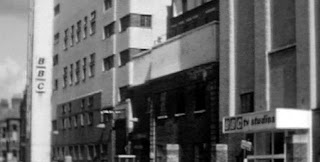 I’ve kerned A–Z, a–z and 0–9 of the Washington typeface so that it’s useful for most English language applications.  Version 2 of the typeface is available to download here. The version 2 package includes the FontForge source file, along with a PDF showing the available glyphs. Windows users will probably need to download the 7-zip utility in order to decompress the archive file.

For a child born in 1971 and growing up in 70s Britain, probably the most magical place in Britain would have been BBC Television Centre. And, thanks to Blue Peter, it was a building that I was pretty familiar with. After all, Peter Purves had shown me countless times that the building was ‘like a huge doughnut, with studios around the outside, offices inside the centre ring and a fountain in the middle’.

One of the most distinctive features of the building was its signage. The same typeface was used on everything from cameras to warning lights to the front gate.

The typeface employed was a very common sight when I was five years old. It was used all over Chard Post Office, on signs made by SWEB (the South Western Electricity Board), and even for signs on the changing room doors at Maiden Beech School in Crewkerne. But, as I grew up, this signage was slowly replaced by signs using more modern faces. By the early 80s BBC Television Centre was just about the only place where it could be seen.

I’d always wondered what the typeface was. The first clue was when I bought the book Encyclopedia of Typefaces by W.P. Jaspert et. al. The book contained a small scan of the face labelled as ‘Doric Italic’. This led me to search on font websites under the ‘Ds’ until I found a typeface that was called ‘AT Derek Italic’. This was close. In fact, it was very close. But it wasn’t right.

For instance, in order to recreate the 1960s caption below, I had to alter the AT Derek lettering extensively:

By a stroke of good fortune, BBC Graphic Designer Bob Richardson was present and he told me for the first time definitively the name of the font. It was called Washington. I then spent a couple of days plucking up courage to ask Bob if he would be kind enough to send me a scan of the font so that I could recreate a digital version.

Bob was very, very kind and also keen to see a version of the font in truetype form – I received a scan of Washington the next day. The scan he sent was taken from his copy of the BBC Graphic Design Print Room specimen sheets. The book contains all of the metal typefaces that were available to graphic designers (or ‘commercial artists’ as they were initially known) from the early 1950s until circa 1980.

Washington recreated by the BBC for a capgen

Bob told me that the BBC had actually recreated Washington in a format suitable for a caption generator for ‘The Lime Grove Story’ (a 1991 documentary to commemorate the closing of the BBC’s Lime Grove studios) but the BBC didn’t have a version of the font in truetype form.

So, now I had a scan I needed to recreate the font. The plan was, as usual, to trace each character or ‘glyph’ in Inkscape…

…then import the glyphs I had traced into FontForge…

…and use FontForge to generate the final typeface.

This is exactly the same way as I had recreated the Central Television corporate font, Anchor and Oxford. Only this time I had the best source material possible.

As I’ve talked about recreating fonts extensively in the past I’ll just talk about a couple of things that were either new or different in this case.

It was this kind of irregularity that really gave the font its charm and sold it as an old metal typeface. Therefore I was determined to keep that as much as possible and not to try and make the font too regular and clinical by ‘fixing’ all these quirks.

R coming to the point

The second thing I needed to know was when to ignore curves. Letters such as the capital R would have curves at the corners where you would expect them to come to a point. I did toy with the idea of leaving these curves in place but that looked dreadful at large sizes so that was one thing I did end up ‘fixing’.

There were a number of glyphs I had to create myself, as they didn’t exist when Washington was created or were not a part of the original face. For instance the Greek letter mu is a combination of the letters p, q and u:

P, Q, U make a MU, Cuthbert dribbled and guffed

I also added things like Euro and Rupee currency symbols, copyright and trademark symbols and so on.

One thing I did this time, which I should have done before, was get FontForge to create all the accented glyphs for me. In other words, instead of creating separate Inkscape files for each accented character and importing them into FontForge, I simply created each accent as a glyph and got FontForge to automatically create all the accented characters for me. This saved me a huge amount of time.

Once you’ve created these few characters…

It’s important for me to have a decent coverage of the Latin alphabet as I know first hand how frustrating Hungarians find it to have to use a tilde or diaeresis instead of their double acute. I also like to make sure that the Welsh language can be used with any typeface I create.

…you get all these free!

FontForge created the accented glyphs almost perfectly and out of a few hundred glyphs I only needed to adjust half a dozen by hand. I found this pretty amazing.

Good kerning makes all the difference to the appearance of a typeface. Here’s the word ‘colour’ unkerned…

Colour with no kerning

…and here it is kerned.

For all my other fonts I had sat down and kerned every possible letter combination by hand. The results are excellent but it also involves a large amount of wasted effort. The reason is that many letters (e.g. c, o and e) kern exactly the same as each other. FontForge not only allows you to put these letters into ‘classes’ to kern as a group, but it will also detect these ‘classes’ for you and attempt to kern them all into the bargain.

I tried using this feature for the first time with Washington, and it worked pretty well for most letter combinations. However I do need to tweak this kerning by hand to ensure that all possible combinations of letters look good. Until this is done the font is only really useful for desktop publishing or vector art where you can alter the kerning of each letter combination by hand.

This task will take two or three days to do and it’s not something I want to do now, as it is really a job you need to come to fresh. So in about a month or so I’ll kern the font and release version 1.1 – I’ll post here when the hand kerned version is available.

So when the font is exported, how does it fair? Well, here’s an example I put together which compares Washington to AT Derek:

As you can see, AT Derek may be more elegant but Washington is definitely more ‘BBC’!

The Washington Book typeface is released under the SIL Open Font licence.

All the software I used to create the typeface was free software, including the operating system – Fedora.

You can download the latest version of the Washington font from here. Windows owners will need 7-zip to uncompress the archive. The font is free – the only thing I ask is that if you find it useful please drop me a line or add a comment below as I’d love to hear from you.