Our Sunday evening routine was always the same – my four siblings and me having their hair washed by Mum on a production line, with Dad on hair-drier duty. You’d regularly smell burning as he’d be distracted by something on “The Money Programme” or “News Review”. If you could smell pork there must have been something really interesting on the news…

Whenever I was able to put the the ever present risk of third degree burns out of my mind, there were two things that fascinated me about “News Review”. One was the bags under Peter Woods’ eyes. The other was the subtitling for the deaf and hard of hearing. It was in a strange but fascinating style of writing you only ever saw on the BBC. 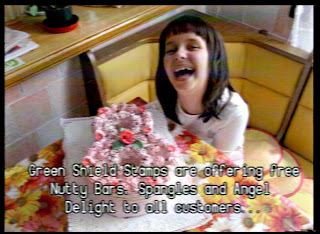 The best thing about News Review was the subtitles

Adding to the mystique, there was also a huge illuminated transparency (about a meter by a meter and a half) of Jan Leeming from “News Review” with this subtitling below the charts in my opticians in Crewkerne that was used for testing people’s distance vision.

The subtitling was created by a system developed in-house by the BBC called ANCHOR. The BBC used Anchor for everything from General Elections to “computer readouts” on episodes of Doctor Who to superimposing “MERRY CHRISTMAS FROM BBC-2” on the test card.

Perhaps the reason I remember ANCHOR with such affection was that it heralded cricket being rained off, which freed up our family’s only television for programmes aimed at human beings with some concept of boredom.

ANCHOR was a largely *analogue* character generator, developed before digital technology was capable of such things, and as such was pretty remarkable. An attempt was made to develop a proportional-spaced ANCHOR – I remember seeing it being worked on – but I think it never got beyond the laboratory stage because it was so complex.

However, Bob Richardson, one of the BBC’s graphic designers at the time remembered it less than fondly:

ANCHOR was a truly dreadful piece of kit. It was “free” to BBC productions (no internal charge was made for it) but nobody wanted it. Only Pres used it on occasions to give close-of-play cricket scores. Pres had one ANCHOR machine in the main BBC1/BBC2 editorial area on the 4th floor at TVC and the other sat in Vision Maintenance on the 2nd floor under a dustsheet. It didn’t get out much. ANCHOR used a monospaced face and had an 82 character set. It… …had been around since the Moon Landing in 1969. The keying was also pretty crap.

I’d always wanted to create an ANCHOR typeface for myself so when, in early 2006, my friend Rory Clark managed to recover a complete edition of “News Review” with Peter Woods and a BBC 2 News summary with Joan Bakewell from a Philips N1500 cassette I was in luck. Both programmes had used ANCHOR to produce subtitles for the deaf and hard of hearing. I took screenshots of every page of ANCHOR text and luckily managed to get every character between those two programmes.

Nowadays, instead of going to all that trouble, I could have simply downloaded BBC Engineering Monograph 84 off of the internet!

I created each character in Macromedia Flash and then imported them into Macromedia Fontographer. This was quite an exciting project at the time as it was the first font I’d ever created.

The end result (a truetype font file) worked rather well, and I’m glad to say it was put to good use by the late Simon Luxton who produced some rather interesting applications of ANCHOR that he remembered seeing as a child. Here is a picture I made for Simon – click to enlarge: 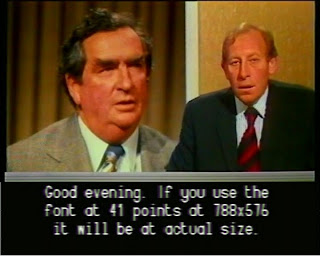 Peter Woods with that bloke off the Nationwide pantos

If you use the font at 41 points on a screen that’s 788 x 576 pixels in height then you’ll get an end result identical in size to the size seen on screen.