Replay Expo time is fast approaching again, which is why Barbara Kelly and Lady Isobel Barnett are pictured below modelling an original piece of my artwork: 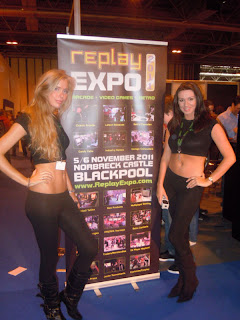 Replay Expo is an Arcade, Video Game and Retro show that takes place every autumn at the Norcalympia Exhibition Centre in Blackpool. Last year’s event attracted 3,200 visitors over two days and the organizers are hoping to attract 5,000 this time. The show is timed to coincide with the last weekend of Blackpool Illuminations.

Last year I was involved in designing fliers, banners, advertisements and the website for the show and the organisers very kindly asked me if I would like to continue doing so this year.

The first thing I needed to do was devise a “Replay” logo for this year’s event. The brief was “the same, but different”. The previous logo was originally designed by “Greyfox”, also known as the talented Irish graphic designer Darren Doyle. It was a beautiful logo and worked fantastically well so I wanted to keep as close to it as possible.

In addition the logo had to be vector illustration, as I would need to export it at some very large sizes indeed. This meant I created it entirely in Inkscape.

This is what I came up with:

It was one of the only occasions I’ve ever got it right first time! You’ll notice I had to reverse the “E” because last year people insisted on calling the previous event “are three play” which rather upset the organizers! 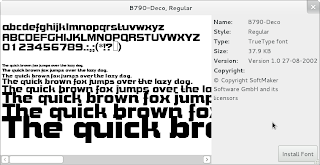 Next was the question of typography. Last year was easy – I was using lots and lots of lovely Microgramma. This year it was again “the same, but different”, so I settled on a Hermann Berthold art deco typeface called B790. This was similar enough to Microgramma that I could use it in the same sort of ways, whilst at the same time looking very different.

The one thing I was disappointed about this year was the design of the 2011 lettering. I spent day after day producing draft after draft: 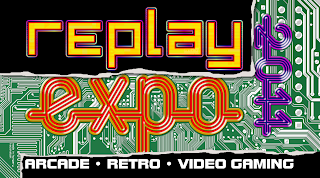 My favourite – I spent hours on this! 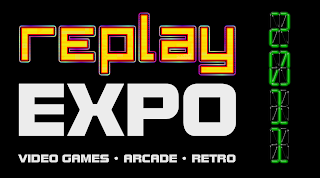 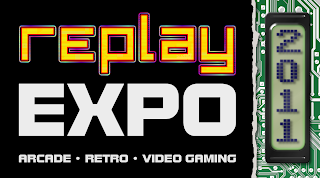 However, in the end nothing I produced seem to grab the client – something that was entirely my fault. In the end, with half an hour or so to spare before stuff went needed to go off to the printers I gave up and produced something quick I’m really ashamed of.

At least the client liked it.

As you can see, the B790 ended up with a bit of a starring role as I used it for the word “EXPO”.

Producing the fliers and roll up banners for Replay Expo was rather interesting this year as the printers decided that only CMYK PDF files were acceptable. In previous years, they had accepted RGB TIFF files exported at 300dpi (dots per inch), which I could export from either The GIMP or Inkscape. But neither Inkscape nor The GIMP can currently produce CMYK PDF files. Therefore, after meaning to do so for nearly three years now, I finally had a good reason to grips with Scribus, a free software desktop publishing package.

The first thing I had to do was a lot of reading. The Scribus documentation is excellent and very thorough, so it was a pleasure to go through it all. Then I went through the tutorial. I had to do that when the children were at school as the first couple of hours featured a statue of a rather forgetful Indian lady who had absentmindedly neglected to put on her undergarments. 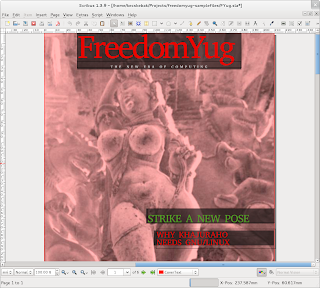 She’ll catch her death of cold…

Fortunately, I had colour management set up on my computer, so soft-proofing worked perfectly. This meant that whatever I saw on screen was very close to how my finished artwork would appear in print.

I produced my Replay logo artwork in Inkscape, and exported the logo as a 300dpi RGB PNG file for import into Scribus. Usually I could import my Inkscape files directly into Scribus, but in this instance I was using Inkscape layer effects (i.e. SVG image filters) that Scribus is currently unable to cope with. 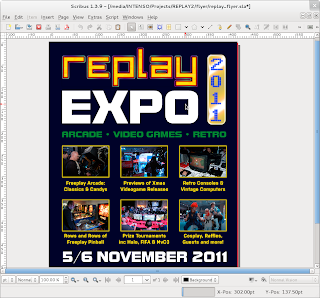 I then created the text and frames directly in Scribus, and imported the photographs into them. It’s actually a very nice way of working as you are using each tool for what it does best.

Once finished, I could export my Scribus file as a CMYK PDF, send it off to be printed and hope for the best.

This was all completely new to me, and I was really nervous as to whether my exported PDF files would even be accepted by the printers, let alone print properly. What was worse was the fact that the Gadget Show Live event was two days away and there wasn’t time to do anything if my files were no good! 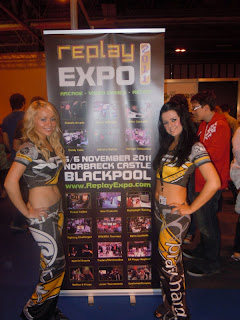 However, as you can see, they turned out quite well. Scribus is an excellent piece of software and I would recommend it to anyone.

Replay Expo takes place at the Norcalympia Exhibition Centre, Norbreck Castle, Blackpool on the 5/6 November 2011. Tickets for the event are available from http://replayexpo.com/tickets