Three years ago I talked about the programs I used to simulate old 16mm film. Back in 2008 I was using Windows XP, Adobe Premiere Elements 4.0 and a VirtualDub filter called MSU Old Cinema. I found I could use them to create some half-decent 16mm film:

These days I’m using Fedora 15 as my operating system and Kdenlive as my off-line video editor. That meant I’ve had to change the way I simulate old film quite a bit. I have been continuing to use VirtualDub and the MSU Old Cinema plug-in via WINE. Although VirtualDub is free software, the MSU Old Cinema plug-in is not, and this bothered me. I wondered what I could achieve in Kdenlive alone and I started experimenting.

In the course of this blog post I’m going to use the same image – an ITV Schools light-spots caption from the 70s that I recreated in Inkscape. Here’s the original image exported directly from Inkscape as PNG: 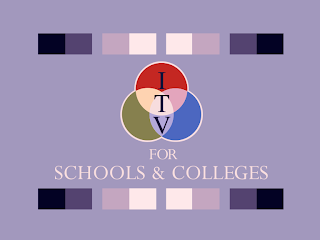 The most obvious sign that you are watching something on a bit of old film are the little flecks of dirt that momentarily appear. If the dirt is on the film itself it will appear black. If it was on the negative when the film is printed it will appear white.

Kdenlive comes with a Dust filter that tries to simulate this effect. However, it has a very small database of relatively large pieces of dirt. In total there were just six pieces of dirt, drawn as SVG files, and that limited number led to an unconvincing effect. If I used the filter on a long piece of video I found I began to recognise each piece! There were also no small bits of dirt.

I drew 44 extra pieces of dirt in Inkscape and added them to the Dust filter. I also redrew dust2.svg from the default set. I call this particular piece of dirt “the space invader” as I found it was too large and too distracting!

The video below compares the Dust filter (with identical settings) before and after I added my extra files:

You may find you prefer the Kdenlive dust filter with just the default six SVG files. However, if you prefer what I have done you can download my extra SVG files from here.

With the modifications I’ve made, I actually prefer the dirt created by the Dust filter in Kdenlive to the dirt you get in the MSU Old Cinema plug in. The dirt from Kdenlive’s filter is less regular in shape and simply by changing the SVG files in the /usr/share/mlt/oldfilm folder I can tailor the dust to any specific application I have in mind.

After flecks of dirt, the second most obvious effect that you are watching old film is a non-uniform shutter causing the picture to appear to flicker very slightly. The MSU Old Cinema plug-in can simulate this effect, but wildly over does it. It is not suitable for anything other than simulating silent movies, so I never used it.

Luckily the Kdenlive Old Film plug-in does a much more convincing job. The settings that I found worked for me are shown below:

And they create the results shown below:

It looks a bit odd on it’s own, but when added to all the other effects I’m describing here it will look fine.

I’ve noticed that when I am creating these effects it’s best if I move away from the monitor to a normal TV viewing distance to see how they look – otherwise I tend to make the effects too subtle to be noticed when I come to watch the results on my television!

The next thing that will help to sell the output as film is having some film grain. Film grain is irregular in shape and coloured. In fact, I used the Colour Spots setting of the MSU Noise filter to create film grain in VirtualDub.

Kdenlive has a Grain filter, which simply creates random noise of 1 pixel by 1 pixel in size. Although technically this is not at all accurate, it can look pretty good if you are careful.  The settings for film grain will vary from job to job, so some trial and error is involved.

As a starting point, these settings are good:

Again, it looks odd by itself (and you can’t really see it at all on lossy YouTube videos!) but it will look fine when added to the other effects. You’ll start to notice the rendering begin to slow down a bit when you have added Grain! Incidentally, Grain is still worth adding even if YouTube is your target medium because it helps break up any vignette effect you add later.

The next thing you need to do is to add some blur – edges on 16mm film in particular tend to be quite soft. Kdenlive has a Box Blur filter which works just fine for blurring. How much blur you add depends on your source material, but a 1 pixel blur is fine as a starting point.

Colour film is printed with coloured dyes, so it has a different colour gamut to the RGB images you create with The GIMP, Inkscape or a digital video camera. In addition, it also fades over time. Therefore to make computer-originated images look like film-originated images some colour adjustment is normally required.

Luckily, Kdenlive has a Technicolor filter that allows you to adjust the colours to better resemble film.

The way colour film fades depends on whether it has been kept in a dark or light place. If I’m recreating a colour 16mm film that has been stored safely in a dark tin for many years, I make it look yellowish. If I’m recreating a colour 16mm film that’s been left out in the light a bit too much I make it look blueish. Both these looks rely adjusting the Red/Green axis slider – not the Blue/Yellow axis slider as you might think! 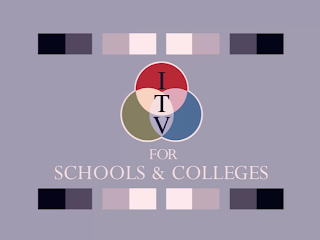 You soon begin to notice that the telecine machines used by broadcasters could adjust the colours they output to make colours that were impossible to resolve from the film. For instance, some of the blue backgrounds on ATV colour zooms were too rich to have been achieved without some help from the settings on the telecine machine. So the precise colour effect you want to achieve varies from project to project, and sometimes you will be actually increasing colour saturation rather than decreasing.

The Technicolor filter is, ironically, the filter you use to make colour source material monochrome too!

The biggest problem when trying to recreate old film is recreating gate weave – that strangely pleasing effect whereby picture moves almost imperceptibly around the screen as you watch.

MSU Old Cinema created an accurate but very strong gate weave which was too severe for recreating 16mm film. The Kdenlive Old Film filter has what it calls a Y-Delta setting, that makes the picture jump up and down by a set number of pixels on a set number of frames. It’s easy and quick (a Y-Delta of 1 pixel on 40% of frames is good) but introduces black lines at the top of the frame and is so obviously fake it won’t really fool anyone!

So there is, sadly, no quick way to create gate weave in Kdenlive. However, the good news is there is a way, provided you’re prepared to do a bit of work. You need to use the Pan and Zoom filter. The Pan and Zoom filter is intended to do Ken Morse rostrum camera type effects – it’s particularly good if you have a large image and want to create a video to pan around it.

However, what we can do is use the Pan and Zoom filter to move the frame around once per second. Firstly you zoom the image in by 108%. This means you won’t see any black areas around the edge of the frame as the picture moves around. 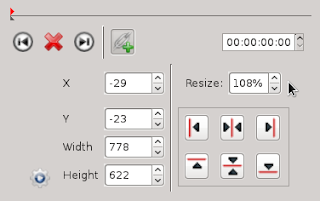 First of all, zoom the image very slightly

Next, you create key frames on each second: 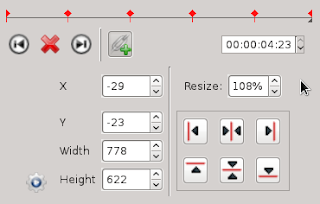 Then add one key frame per second

Then you move the image around slightly on each keyframe – plus or minus two or three pixels from the starting position is often plenty.

Obviously, for a 30 second caption that’s 30 keyframes and 30 movements – a lot of work if done “by hand”. However it won’t go to waste, as you can save your Pan and Zoom settings as a Custom effect and resuse it again and again on different clips.

And, luckily, doing all this by hand isn’t even necessary. Custom effects are stored as simple XML files in the /kde/shared apps/kdenlive effects folder so it is possible to write a small Python script to automatically create as much gate weave as you want – something I’ll come back to.

As well as gate weave, you can also use the Pan and Zoom filter to stretch the frame, which is perfect for simulating stretched film. Again, that’s hopefully something I’ll return to another time.

Here’s an example of video moving with the Pan and Zoom filter:

The Pan and Zoom filter also adds hugely to your rendering time, so it’s best to switch it off until you do your final render.

Glow is a very important effect to add when simulating film, particularly monochrome film. Kdenlive does not have a glow filter, so if I need to add glow to a video file I have to improvise. I export the video as a PNG sequence, add glow to the PNG files using a GIMP batch script (written in Scheme), and then reimport the video file. It’s worth the effort, as it’s amazing how much glow helps to sell something as being originated on film. 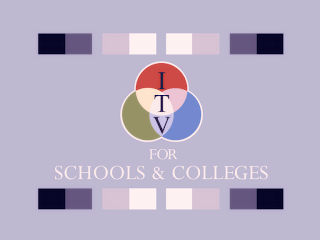 The GIMP glow filter tends to be rather harsh, and tends to wash out images if you use too much glow. Therefore you have to experiment a lot.

Finally, there is often uneven brightness or contrast visible across a film frame. In VirtualDub I used a filter called the Hotspot filter. The hotspot filter is actually designed to remove this effect from old film, but turned out to be just as good at putting the effect in!

However, with Kdenlive, this effect is best achieved in the GIMP when required as Kdenlive’s Vignette effect is too unsubtle to be of any real use.

So, put it all together, and you get something like this:

All in all, Kdenlive does a pretty good job of making digitally originated images look like 16mm film but although there is room for improvement. The film scratches filter needs work, there is no glow and the film grain is really just noise rather than grain. However you can still get some excellent results and I’m really pleased with it.