A little while ago Gareth Randall dropped me a line to let me know he was going to use my Anchor typeface for one of his projects.

Gareth is an award winning promo maker, who I first got to know when was making trails and promotions for ITV.  He was one of the masterminds behind the final London Weekend Television start-up routine.

I was delighted to discover that the project Gareth had in mind was a promotion for the Doctor Who Revisitation Box set. Being a bit of a fan of Terrance Dicks and Robert Holmes this was a huge honour. So, here is Sharaz Jek trying to get Peri to suck his finger. I like to think it was my rather foxy typeface that got him in the mood… 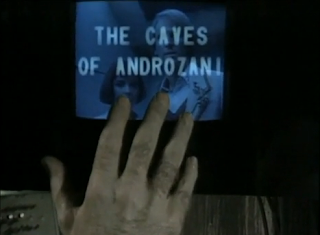