My interest in all things Granada was piqued recently when I came across a copy of “Easy Go” by Nick Glennie-Smith. This was the breezy mid-80s start-up piece that was usually heralded by a very naff block graphic transition and ended up with Colin Weston talking over it cheerily in-vision to let us know how parky it was outside. 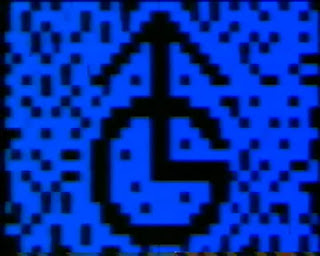 I’ve always wanted to have the Granada block graphic transition available as a Flash file should I ever need it, so when I got some free time recently I decided to recreate it. For source material I had an old RealVideo file of a VHS recording of a Granada closedown which I downloaded from the web many years ago.

The Granada transition is based on a grid of 32 x 24 squares, meaning that each square was 24 pixels in size making up the full 768 x 576 PAL resolution. So the first thing I did in Flash 8 was change the grid from 18 pixels to 24 pixels. I then added guides every four grid squares to help positioning on screen.

To help me create the animation, I needed to view the video file frame by frame in Avidemux. However Avidemux didn’t like my rather antiquated RealVideo source file. Luckily I was able to convert the RealVideo file into an mpeg file using the command line video tool ffmpeg:

After that I trimmed the resulting mpeg file in Avidemux so that it only contained the transition.

I didn’t bother turning the video file into an FLV to import into Flash – just as well as it turned out. I had enough problems with memory as it was! As I run Macromedia Flash 8 using the WINE compatibility layer for GNU/Linux, Flash 8’s performance tends to struggle with files over about a megabyte in size.

My approach was to use a symbol for my pixel, and build up each frame using multiple copies my pixel symbol. 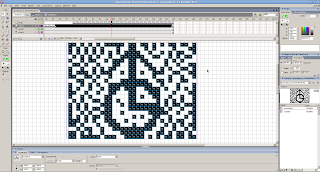 A really stupid way to do it…

Although it worked fine at first it was a big mistake in retrospect as it meant I eventually created a large, unresponsive Flash file. This is because when you use Flash in WINE for large files you have to use Save And Compact… for each save to stop the file growing exponentially in size and eventually corrupting. Worse still, whilst it is saving Flash becomes completely unresponsive.

As I worked on the Granada transition each Save and Compact… took longer and longer and would often throw me out of Flash completely so I had to reload it again. Flash also became increasingly slow and unresponsive while I was working. It got so bad that in the end the majority of time was spent “Saving and Compacting” rather than animating.

By the time I’d finished it had taken me an hour to do one second of animation – absolutely ridiculous! My end result was 2.4MB Flash File that took about six minutes to save after each alteration but output a SWF animation that was about 6K in size.

In order to be useful obviously needed a file I could actually work with sensibly. After breaking apart all the square symbols I got a file that was a more manageable 237K – and that could be saved instantly. However the output .swf file went up in size several times to nearly 23K. 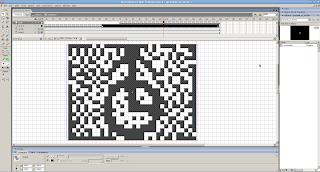 I kept my original Flash file so that at a later date I can create a 16:9 aspect ratio version of the Granada transition. But I think I’ll wait until the performance of Flash 8 improves in WINE before I tackle that one!

The only other problem I had when creating the transition animation was the RealVideo file I had dropped the odd frame, so I had to create two frames from one at certain points. 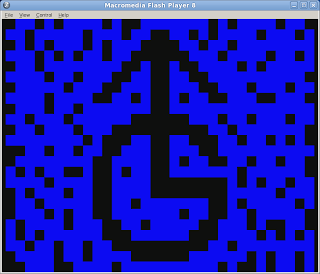 I was lucky enough to have some excellent source material for the Granada station clock – the output of the actual clock generator itself courtesy of Greg Taylor. Having the clock output also allowed me to get the RGB values of the actual colours exported by the electronics used to generate the clock and caption. Looking at off-air recordings of the clock and caption in use, I reckon these were often tweaked a bit in the gallery to make them a more Granada-ish powdery blue.

The clock itself was an interesting job. A couple of years ago I would have drawn and animated the entire thing in Flash 8. However, I did a mix and match for this. I drew the bottom of the clock with the Granada Giro G and namestyle in Inkscape 0.47. Then I exported the result as an EPS, imported the EPS into Flash 8 and then drew and animated the clock face itself. 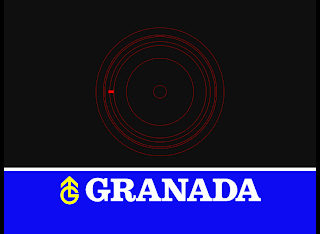 Clock base created in Inkscape 0.47… 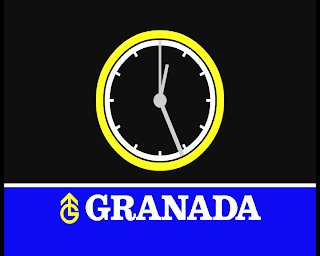 … and finished off in Flash 8

The clock was a pretty quick job, polished off in under an hour from start to finish. 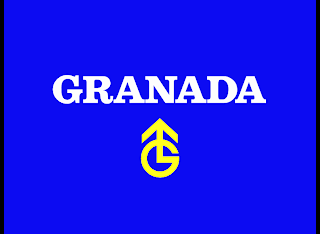 The Granada electronic caption was another quick job, as I had a large, high quality scan of a genuine caption card from Matthew Gulliver’s collection to work from. This caption dated from the same era as the closedown and the proportions of both the logo and lettering were identical.

Once I had all the bits and pieces I stuck them together in Flash 8 and exported the resulting sequence as a PNG sequence. I turned the PNG sequence into an uncompressed AVI file using VirtualDub. Then I imported to AVI file into Avidemux to add audio and export the result as an H.264 video/MP3 audio MP4 file.

I uploaded the finished result to my YouTube channel, and here it is: