Well, I’ve had Prof. Steve Furber giving lectures in front of my artwork, now I’ve got the legendary Sophie Wilson playing with robot arms next to it. 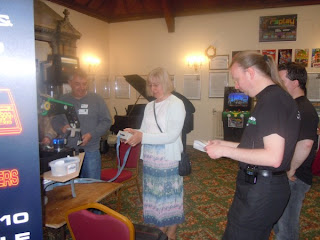 The event was the Vintage Computer Fesitval, which was held on the 19-20th June at The National Museum of Computing in Bletchley Park. 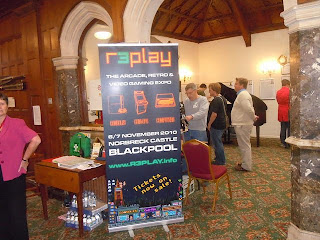 Nice banner, shame about the carpet.

The artwork, a long banner, was produced for R3PLAY – an computer exhibition which is going to be held on the 6-7 November in Blackpool. I’ve spent a lot of time on various bits and pieces for this event this year.

The extremely striking R3PLAY logo was originally designed as a raster image by Darren Doyle – better known as “Greyfox”. I just about managed, using Inkscape, to reproduce this image in vector format so it could be blown up to enormous sizes for use on banners and posters.

The hardest part of vectorising the logo was reproducing the faint images of flags that are superimposed on the lettering – I had to trace these by hand and it was a long and quite fiddly job – particularly because the effect of the flags is quite subtle. 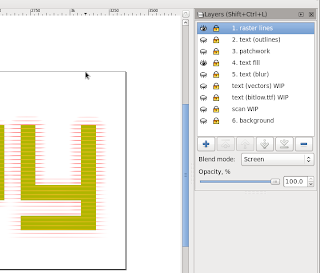 The raster lines themselves are squashed ellipses in a layer with the “Screen” blend mode enabled so that they make the layers underneath them lighter.

The final challenge was getting the red glow around the letters correct. Again, this involved layering several filtered copies of the lettering on top of each other, and it was quite a struggle to get it just right. However, the glows scale unpredictably, which means reworking them every time I resize the logo.

Underneath the logo were vector images I created in Inkscape by tracing photographs I managed to find using Google images. Tracing vector computers is a very straightforward job, and quite a pleasant one provided you have some music to listen to. The only hard part is matching fonts, and even that is easy if you have a Letraset catalogue from the seventies!

Not all the vectors I produced were used. For instance, here is my Acorn Electron: 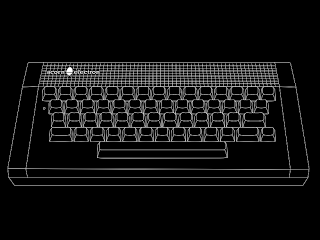 One trick I used when doing this sort of thing is to make good use of the Inkscape Perspective plug-in to map square on views onto a parallelogram.

The pixel artwork at the bottom of the banner was produced by the world renowned pixel artist Gary Lucken (aka Army of Trolls). 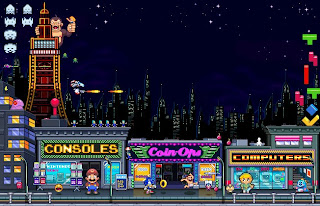 In order to produce magazine advertisements from this artwork I did have to extend it slightly horizontally in The GIMP – I did it by copying elements form Gary’s design – I even manage to incorporate the BBC Computer Literacy Project’s owl. 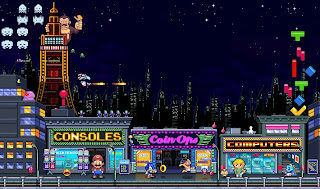 …ruined by me. Sorry.

Once I had created this expanded version of the artwork I set about creating the artwork for the adverts that appeared in retroGAMER* and gamesTM magazine. This was quite nerve wracking – to be honest I haven’t been so nervous since I was first did graphics to be broadcast on television.

After much experimentation I decided on the 50s font Microgramma to be the “corporate font” for R3PLAY. I like the font, it looks both retro and modern and it was also the Commodore font from the early 80s. 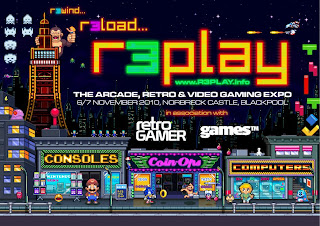 I also produced an A5 version for fliers – Dave Moore is one of the masterminds behind the R3PLAY event, and shamelessly uses the fliers for promoting the show at every opportunity.

So my flier was stuck to Daleks…. 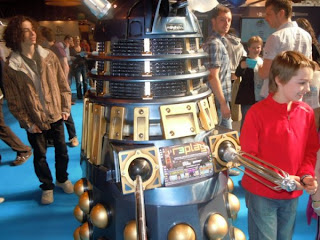 And brandished by attractive young ladies… 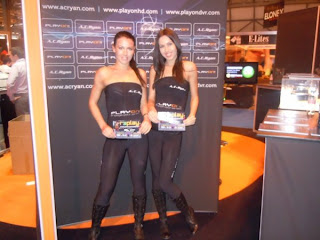 Edward Bernays has nothing on Dave M

Another early job was creating the tickets for the event. Again, another Inkscape job for a huge print run which I always find nerve wracking. I recreated both the Macmillan logo and the National Museum of Computing logo as vector images as I didn’t have vector copies.

The tickets looked rather striking in the end, but Dave Moore told me had to bin the whole of the first print run of tickets and have them reprinted elsewhere in order to do them justice.

The final graphics for the adverts, fliers and tickets were exported as enormous TIFF files. However for things like the roll-up banners I had to produce PDF files. I found the best way to do this from Inkscape was to Print To PDF, rather than export to PDF from Inkscape. The latter method produces absoltuely terrible results, where as printing to PDF produces results which are flawless.

R3PLAY is organised by the non-profit organisation the Computing and Gaming Events Union (CGEU), and I was also responsible for tarting up their logo. The original was again designed by Darren Doyle. I placed it in a roundel, made the Pac-Man image a vector shape and added some depth to him and finally added some lettering in Inkscape: 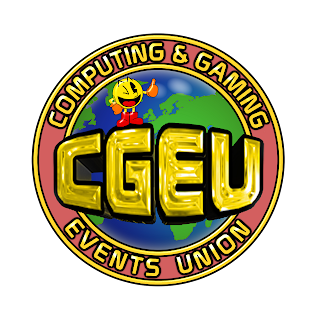 One of my main jobs for the R3PLAY event was producing its website. In order to “save time” we decided to use Joomla and base the design of the website on an existing Joomla template from a commercial supplier who shall remain nameless. 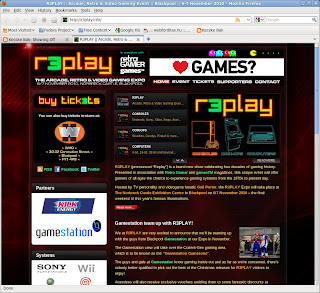 This was a very frustrating experience as there were numerous bugs and several unfinished bits and pieces in the template we purchased and I ended up having to get rapidly expert in PHP and CSS in order to get the thing working as required. There were also no useful Photoshop templates for the artwork, so I ended up having to recreate all the source files for the graphics in The GIMP from scratch.

Obviously this was all good practice for me but not what you want when you are working against a deadline for a very exacting customer!

One of my favourite jobs on the website was producing the animated Pac-Man gif that is displayed about the advert on the home page.

To do this I took several screenshots from version 1 of Acornsoft Snapper in Tom Walker’s excellent BBC Micro emulator B-Em, traced the sprites and animated them in Macromedia Flash 8 and then exported the result from Flash as an animated GIF.

R3PLAY looks like being an absolutely fantastic show, and well worth a visit if you can make it. Besides which, by attending you will be helping to raise money for two very worthy causes – Macmillan Cancer Support and The National Museum of Computing.

It has three strands – Consoles, Coin-Op games (including Pin-Ball) and Computers. The latter includes a strong retro contingent of the well known names such as BBC Micros, Electrons, Archimedes as well as the more obscure things such as Commodore 64s, Amigas, STs and ZX Spectrums.

2 Replies to “Showing Off”