I am ancient enough not only to remember it, but to have watched it as nature intended at primary school every week before a programme. I was always mesmerised by it, but my unimpressed teachers used to complain that it wasn’t as easy to understand as ITV’s schools clock.

The diamond mechanism itself is fascinating and it was very satisfying to work out how it worked. 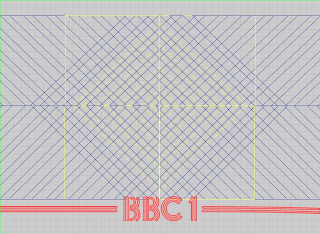 The diamond animation as outlines in Flash

The four striped version of the diamond was originally only a static caption card, intended for use in place of the mechanical model in intervals less than two minutes in length.

I always wanted to see it being animated. Hence another lame mock that I produced, as always, in Macromedia Flash 8.

I find the overall effect is rather akin to seeing one of those 4×4 or 5×5 Rubik’s cubes for the first time.