Google recently got a lot of criticism for “copying Microsoft’s search engine Bing” in changing the background of their home page. But, if I remember correctly, they did this as an experiment once before long before Bing came along to showcase loads of Google commissioned “modern art”. Although, that time, they didn’t enforce a random work of “art” on you by default.

The pictures that Google offered up were so gaudy and obvious I thought I’d use one of my own, taken from an animated Granada Television close-down sequence that I produced using Inkscape: 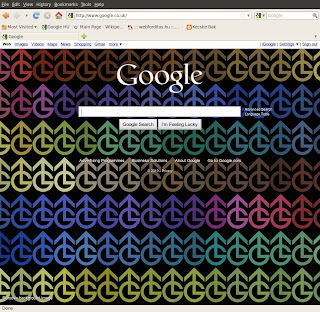 Google’s homepage is so resolutely minimalist that it reminds me of Granada Television’s ident throughout the 70s and 80s; the two were obviously made for each other.

Now all I need is some Derek Hilton…