I had finished creating my BSB Squarial font on December 16th. It was now the December 17th, the event was on January 9th, Rory hadn’t yet received any BSB material from Kaleidoscope and time was getting short.

So, to make sure I had a fighting chance of getting an ident ready in time for Rory to use, I turned to the ever reliable TV-Ark site. I found some wonderful scans of BSB promotional material that I could use as source material. I started putting as much of this as I thought would useful into Inkscape.

The first thing I did were the channel logos – Movies, Now, Sport, Galaxy and Power Station. Due to the good quality of the source material I ended up being able to produce nice vector versions of these logos in Inkscape.

I also used Google Image Search which sucessfully came up with some other source material I thought may be handy. At the fascinating Vintage Broadcasting site I found a fantastic IBA breakdown caption, which I recreated in Inkscape. 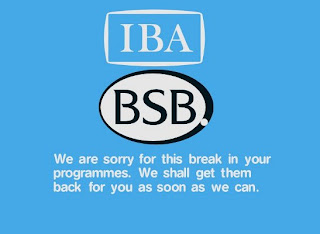 …and a test card used for engineering tests. Again I recreated it in Inkscape. 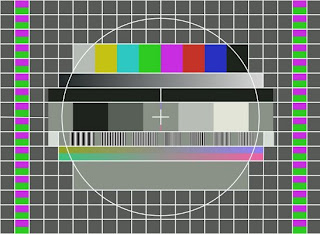 Another thing I found was the caption that was broadcast when BSB transmissions on the Marco Polo satellite ceased. Again here’s my Inkscape recreation. 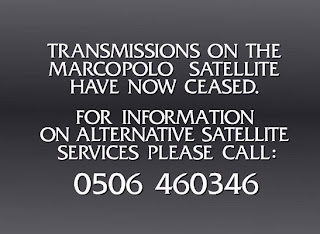 It was interesting that they used Friz Quadrata rather than the BSB corporate font for this. I suppose they must have been past caring by then!

Once I’d done all this I sent it all off to Rory in Inkscape SVG format so that he could use or edit any of the files I created if he needed to.

The good news was that Rory had received the BSB material from Kaleidoscope. The bad news was that it seemed to be mainly third generation VHS stuff. This is a nightmare source material for recreation because the VHS format chucks away so much picture detail and colour information that recreating anything from grabs of VHS material is slow, frustrating and largely down to guesswork.

However, Rory did send back ident grab of a BSB logo which was very handy, and which I duly recreated in Inkscape. The letters are a bolder weight of the BSB font than the one used in the caption below it, so I drew them from scratch.

The coloured ring in the BSB logo is quite interesting. To do this I created a coloured background that was made of a red, yellow, green and blue fills overlayed on top of each other and grouped into a single object. 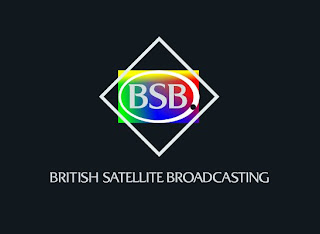 Then I created the shape of the ring, and used that as a mask over the coloured background.

My final port of call was Mike Brown’s excellent mb21 site. The mb21 site contains an extensive library of scans historical documents related to UK Broadcast transmission. What I was after was the famous BSB testcard complete with the girl who won the newspaper “be a the satellite test card girl” competition. 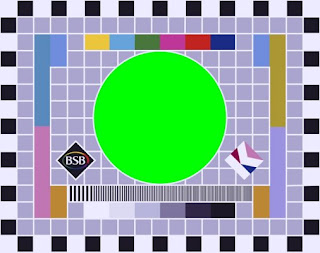 Once I had done this, and sent it to Rory I had done about all the still images I usefully could so I couldn’t delay doing the animated ident in Flash any longer. I still had no audio too, but I decided I’d start creating an ident anyway and hope for the best.

After Channel 4 burst onto the scene in 1982 with its famous CGI blocks logo there had been a glut of shiny plastic and metallic 3D shapes whizzing about the screen in television presentation. That meant that by the time BSB came along just seven years later that sort of thing was all old hat. What was now in vogue was creating lots of soft fluttery layers of images on top of each other with subtle lighting changes.

This actually suited me, as I don’t have my copy of Swift 3D here in Hungary with me, so I couldn’t have created something very three dimensional anyway (although if I had had Swift 3D my finished BSB ident would have been much nicer).

The brief from Kaleidoscope was to create an ident with the BSB logo and the legend “The Quest Continues…” underneath it. Obviously thoughts of space and Star Trek and Dr. Who came to mind.

“The Quest Continues…” text would be easy – I’d simply zoom it into view with a trail Tyne Tees 1979 stylee. Clichéd, naff and typical of me… 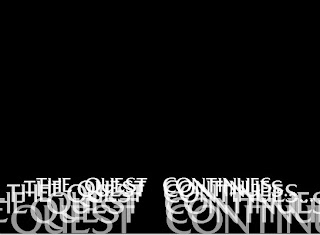 For the background I used a nice picture of Pleiades star cluster that I found on Wikipedia. I’d used this before for a Rediffusion Christmas ident that I’d recreated for Transdiffusion. You can see it below, behind the Rediffusion ad astral logo – you’ll probably have to click on the image below to see it. 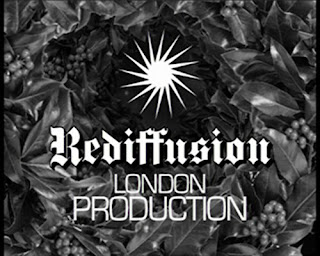 One of the things I wanted was to make a nice form-up of the diamond shape around the BSB logo that represented the BSB “squarial” receiving dish. I also wanted to make this a bit kaleidoscopic, in honour of the fact that the ident was being done for Kaleidoscope.

I decided on the simple device of making the sides of the box zoom in with coloured trails using Flash motion tweens.

I did an early test with solid colours – and this looked all wrong. It looked like a 1970s cel animated ident. 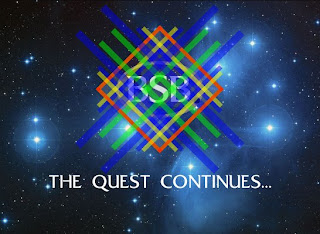 However, with some gradient fills and some alpha transparency it suddenly looked all right. 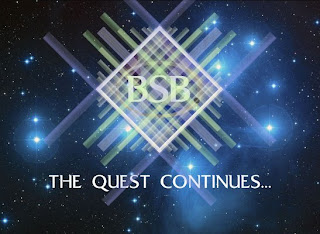 What a difference a fill makes…

Rory sent some audio and a genuine BSB Galaxy ident – this was handy because I hadn’t actually seen any real BSB presentation at this point.

I realised that I needed to make the ident longer, and I also needed to add some more elements to layer it a bit more and make it a bit more “Lambie-Nairn” than “Lamey-Dave”. I came up with some ribbons accompanied by Galaxy-style five-pointed stars. 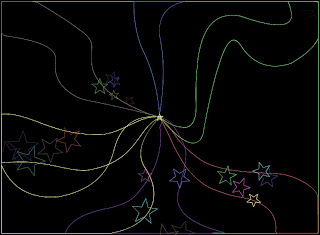 Animating the ribbons in Flash

These were simply animated using shape tweens (shape morphs) in Flash. As well as tweening the shape of the ribbons, I anmated the gradient fill inside them to simulate the lighting effects. I used primary and secondary colours rather than the subtler shades that Lambie Nairn used as I wanted to get over the idea of “television”. 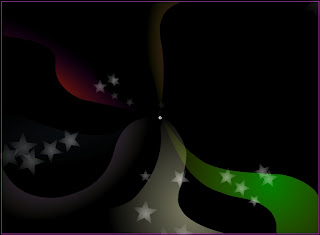 Again, drawing the ribbons in Macromedia Flash 8 was a horrible job and every second of doing it made me miss Inkscape terribly. Using Bézier handles in Flash 8 is fiddly and unintuitive and I can’t believe how much work I actually did using them!

I could have used Flash 8 Professional filter effects in my ident, which would have allowed Gaussian blurs, compositing effects etc. and made the end result both more pleasant to look at and created an effect more faithful to the genuine BSB idents. However I decided against this as if I had relied upon them and Rory couldn’t import them his end we would have been stuck. I didn’t have time to post him a DVD of an exported video file from Flash.

Rory, as always, immediately spotted what was wrong with my ident and added some beautiful stars that slowly moved towards the viewer, which made all the difference to the finished product. And here it is:

I’m really, really pleased with the way the finished ident turned out. My comfort zone is doing material from the 50s, 60s and 70s so I was really dreading doing a job that was supposed to evoke the late 80s. So to get anything approaching half-decent was a huge relief.