One of the blogs I follow is Cheeseford, a blog written by the author Louis Barfe. There’s always something on there worth seeing, hearing or reading that I wouldn’t have stumbled upon otherwise.

A good case in point was today, when Louis linked to a blog called Gypsy Creams, that is run by a friend of his. The blog presents scans of articles and advertisements from women’s magazines from the 50s, 60s and 70s.

Quite apart from being filled with beautiful examples of the typography of the period and being very funny, it also very nostalgic. One image on the blog screamed out at me “do an SVG version in Inkscape, quick”.

It was the Co-op “clover leaf” logo – something that evokes all sorts of memories from me. Chard High Street was dominated by the Co-op when I was growing up. There was the Co-op dairy, the Co-op furniture and clothes department store and the Co-op supermarket.

My paternal grandmother, who lived in Chard, was an atheist and staunch socialist (she was a very sensible woman – which is probably why she never liked me much) and because of that she liked to use the Co-op as much as possible. I remember the beautiful Bakelite milk cheques on her mantlepiece, the reams of Co-op dividend stamps, the 99 tea she used to buy and the Co-op milk bottles on her doorstep. Most of the things on her kitchen shelves would have the Co-op clover leaf logo on it somewhere.

Anyway, the first thing I did was cut the logo out of the scan from Gypsy Creams using The GIMP. I loaded the scan into Inkscape and then  drew the letter O at the top right hand corner. To draw the O, I drew two points, at the top middle and middle left of the O. I then copied and reflected the resulting curve to get the entire outline of the outside of the O. I then copied the outside of the O, and shrank it down in place by holding down Ctrl+Shift as I scaled it with the mouse to create the inner curve. 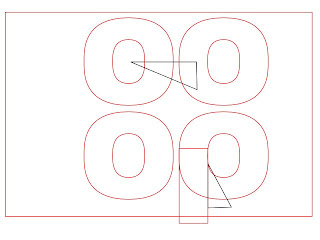 The Co-op has asked you all to do some Inkscape…

For the rest of the letters I simply copied the finished letter O on top of them and tweaked them slightly. I drew a triangle for the cut-outs on the P and C and a rectangle to create the descender on the P. A box for the outside and I was finished apart from colouring it in with some suitably faded colours. It took far longer to blog about than to do! 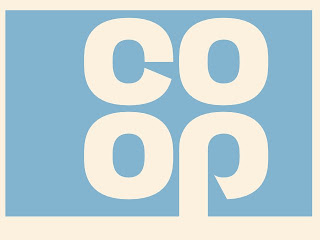 And as for my Granny – well, it seems I’ll never escape her. My daughter Mary looks almost exactly like her.