Having got heartily fed up of Ubuntu GNU/Linux snap, crackling and popping at me at the slightest provocation, I ended up looking for a solution. After a quick Google I found the answer. It turns out I’m having this audio issue because Ubuntu is utilising a power saving “feature” of Intel integrated sound hardware.

At the command line, if you type:

And then comment out the following line in the gedit window that appears by putting a hash (#) symbol in front of it:

You’ll find that, after a reboot, there’s no more popping.

I’ve also finally discovered a music player program for GNU/Linux that does exactly what I want. It’s called Quod Libet, and comes with an excellent piece of tagging software called Ex Falso. 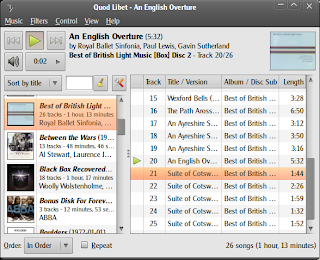 What exquisite taste this man has.

I’ve found it to be utterly fantastic for people like me who like to organise and tag their music to an inch of its life.