I’ve finally finished my Scene.ttf font (which you can find out more about here and here). I added all the glyphs I think I’ll ever want to add to it – I’m sick of it now! Mind you I enjoyed delving into the strange world of macrons, ligatures, ogoneks, cedillas and breves. That is, I enjoyed it until I had to produce dozens and dozens of glyphs using the damn things!

As you can see from the FontForge font view window below, there are rather a lot. You can click on the picture to make it bigger. 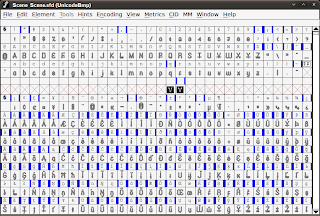 After I added Hungarian characters, I also wanted to add Welsh and once I had added Welsh I thought I might as well add the lot. The font is in truetype format, but because of all the extra characters it now uses the Unicode BMP encoding.

I showed my Scene font to a friend of mind called John Livens. He is a retired printer (and also an excellent painter). He said:

OXFORD!!!! I remember it well. If you’ve ever tried to rub down a line of Letraset, especially an old sheet of Letraset, you’ll not forget Oxford…

Anyway, now you can use something approaching the old Letraset Oxford face in the comfort of your own home without having to worry about inking the gaps in broken lines with pen or running out of “e”‘s. The finished font is licensed under the SIL Open Font Licence 1.1 and can be downloaded from here.

Right, I’m off for a lie down…