After producing Version v.0.001 of my Scene font (my version of the Letraset Oxford typeface) I found all the empty glyph spaces I was left with in the FontForge Font View window rather unsatisfying. It felt like the font was only half finished. 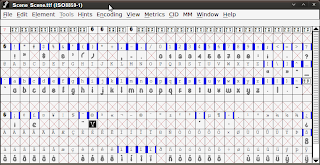 The trouble was that I’d created all the glyphs that had appeared in the original Letraset Oxford face, so if I wanted to add all of the missing glyphs I’d have design them myself – in particular, I’d need to design the whole of the upper case. Despite worrying what on earth I’d end up with, I fired up Inkscape and decided to have a go.

There were some letters such as B or D where I thought it was pretty clear what an upper case version would look like. The font as a whole reminded me of the plastic stencils I used to have as a child which contained what looked like German DIN rounded faces.

The first test I did was the upper case A. I used the same angle of slope as the lower case letter v in the original Letraset Oxford face and the same height as the lower case letter letter l. The only decision then was where to place the cross bar on the A, and though I did toy with making it an extension of the horizontal line that joins up the letters in the end I decided to put it higher up, where I thought it looked best. 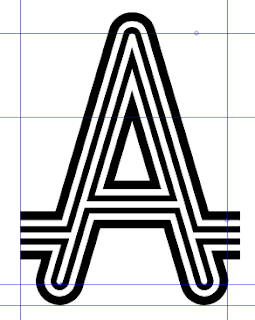 However, when I came to the D and B I found it far more problematic to get them looking right. The lower-case letters look like a condensed face and are quite rectangular, so one problem I faced was to get the right width to height ratio. It took several attempts to get the D correct.

I could do with a D…

Once I’d sorted out the D, the B was even worse. The main feature of the Oxford face is the line that threads all the letter and number glyphs together. The lower case letters were designed to keep the area around the horizontal threading line as clear as possible, and therefore my first thought was to make the line that bisects the B as high as possible. However, this ruined the readability that is such an important part of the font, and also made it look rather 1930s instead of 1960s/70s.

You’ll notice in the B and D examples above that I also had to make all the right angles rounded in order to make the face look consistent.

The next problem was the letter E. There were two considerations here. First, there was the fact that the lower case e in the original Letraset Oxford face was one of the most distinctive features of the face, and I wanted the upper case E to be distinctive as well. The second problem was that pesky threading horizontal line.

The bottom bar of the capital E was going to interfere with this, and I really didn’t want that to happen on such a commonly used letter. I decided I needed some kind of rounded E, but I had a four attempts before I settled on my third design.

An identical problem was presented by the letters L and Z. In the original Letraset face they just ignored the problem and let the bottom of the lower case z and the threading line clash with each other. So for the upper case Z I just did that too. For the L I did experiment with having a rounded bottom, but it looked dreadful and therefore created another clashing horizontal monstrosity. 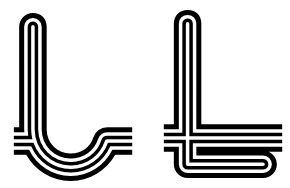 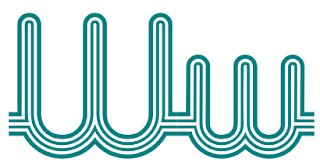 If you tried version v.0.002 of scene.ttf you’ll know that the face is proportionally spaced, but it is not kerned. That means that the spacing can appear odd with certain letter combinations. This is unavoidable, as most font renderers make a rather horrible effect on the threading horizontal stripe if you try to kern letter pairs closer together.

An ugly Kern. And I don’t mean András.

The spacings on the lower case are the same as on the dry transfer lettering version of the Letraset Oxford face. The spacings on the upper case are my best attempt at being as useful as possible, but in some circumstances the kerning won’t look right. However, this is easy to fix if you using the font in a tool such as Inkscape.

Another distinctive feature of the Letraset Oxford typeface is that the numeric glyphs are not full height, but are the same height as the lower case letters. This meant that I made all the symbols that are used mainly in connection with the number glyphs look best when used with the rather small numbers. This includes the vulgar fractions, the currency symbols, the degree sign, the multiply and divide signs and the ordinal indicators. This means they may not look very good when used with upper case letters, but I hope what I’ve done is the best compromise.

Hopefully you’ll appreciate what I did with the plus, minus and equals symbol. They can either be used “threaded” with no gaps between them and digits, or they can be used with “capped” ends so that they can be used with spaces. The example below shows both, and the sequence of letters needed to create each string.

The @ or “at” character was a tricky one to design. I thought that the main usage of it these days would be to create e-mail addresses, so I designed it to look best in email addresses made up of lower case characters. This means it doesn’t look very nice in strings of upper case letters. However it does look fine when used with digits, which is the other place you would expect it to be used.

When I came to create accented versions of my newly designed upper case glyphs I got a rather nasty surprise. With acute or grave accents my characters are too high. In TrueType or Postscript fonts glyphs should not normally appear above the 819 pixel mark. In the picture below the top horizontal rule is at 819 pixels – and my acute accent goes over this by quite some margin! This was caused by my inexperience and next time I create a typeface I’ll ensure that the accented characters are a legal height. 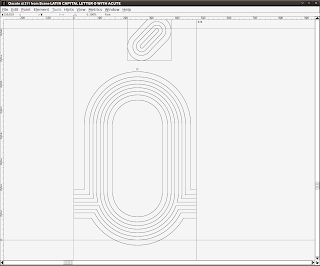 A glyph that I’m not very happy with and am still thinking about is the capital letter Ash. The letter Ash is the letter A joined to the letter E to make Æ. I particularly wanted the letter Ash to look nice because my favourite band is called Mæstoso. However, The problem I faced was joining my rounded capital E to a non-rounded A – the end result is a bit too narrow for my taste.

Gone Ash tray –  (the letter, not the material) 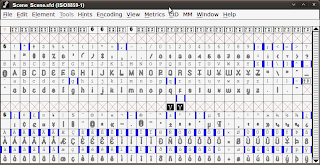 As I have said before, I want to add Hungarian characters with double acute accents and also a Euro symbol to the Scene face. To do whis I need to add the glyphs in the Latin0 (ISO/IEC 8859-15) and Latin2 (ISO8859-2) character sets. I plan to do that in v.0.003 as and when I get the time and write another blog post when that version is ready.

Meanwhile, version v.0.002 is licensed under the SIL Open Font Licence 1.1 and can be downloaded from here.