I’m a big fan of free software in general and the GNU/Linux operating system in particular. The first distribution or “distro” of GNU/Linux I ever tried was Ubuntu, and being a huge fan of brown and orange it’s the version I’m still using on my computer to this day.

I like free software because even though I don’t have time to write many programs these days, I like fiddling with software and I like sharing software with my friends, and free software positively encourages you to do both.

GNU/Linux is also a natural choice in our household as it’s multilingual – it allows us all to run the operating system and applications in whatever language that suits us whenever it suits us.

Recently I’ve been testing the Beta and Release Candidates of the latest version of Ubuntu – version 9.10 or “Karmic Koala” as it’s known. As you read this I hope to be sat in front of the full release version.

I’ve noticed that there is a new feature that makes my life a lot easier in Karmic, and that is the font previews you get in the Nautilus file browser. 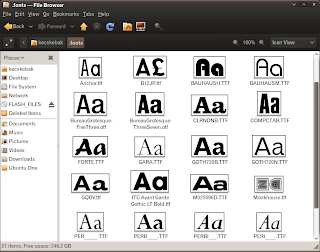 This is a lovely feature and saves me hours of work in an average week when I’m hunting for a font I’ve forgotten the name of out of a collection of thousands.

For those of a typographical persuasion there is also an excellent article about using fonts on Ubuntu here.

If you’ve never tried GNU/Linux, doing so – even for just an hour or two – is easier than ever and I do recommend you give it a whirl.