You may remember I blogged about bits and bobs I did for the Acorn World Show, which was held on the 13th September 2009 in Huddersfield. You also probably know I’ve also done a lot of work this year for one of the main exhibitors, Retro Software.

The Centre For Computing History, the museum that’s preserving some of my work for posterity, made video recordings of some of the speakers at the Acorn World show and one of the speakers happened to be one of the geniuses behind the BBC Microcomputer and the Acorn Risc Machine or ARM chip, Professor Steve Furber CBE. 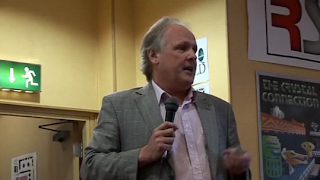 Professor Steve Furber and my artwork. It doesn’t get much better!

They’ve posted Professor Furber’s talk online, and I’m delighted to say that you can see him wandering about in front of my posters for pretty much the whole video. I’m sure he was only standing in front of them so they wouldn’t make the audience vomit, but it still made me incredibly happy. 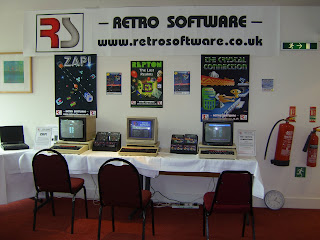 Before the RISC OS London show, Dave was offered a free advert in the new .pdf format RISC OS magazine “Drag And Drop“. Dave asked me to modify one of the adverts I’d designed for him.

One of the modifications he asked me to make was to replace the “See us at the Acorn World” flash with a “See us at the RISC OS London Show” flash. To do this, I needed to make a vector copy of the small bitmap RISC OS London Show logo Dave supplied me in Inkscape. I copied the logo quite faithfully, but I couldn’t resist changing the Gill Sans for the rather more fitting Johnston’s Underground. 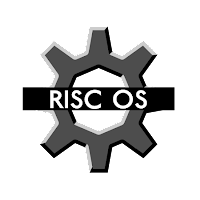 You can see the advert in the sample copy of “Drag And Drop” that’s available here.