Whereas my BBC Micro and Master 128 are as reliable as ever (whenever I get the chance to go to the UK to use them) my A3000 has long since given up the ghost. It’s a real shame as I loved it just as much as my Beeb at the time.

However, thanks to a job I’m about to do for Retro Software I tried to fire up Tom Walker’s Windows binary of Arculator on Ubuntu Linux under WINE. I had simply assumed before that it wouldn’t work – how wrong can you be, it works beautifully: 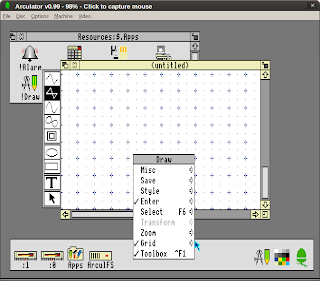 I have just as much old stuff languishing on 3.5″ floppy for the Archimedes as I have for the BBC Micro – Repton 3 screen designs, test cards and bits of presentation in !Draw format, programs including a rather nice version of Minesweeper I wrote in BBC Basic, some programs I wrote in ARM assembler and so on.

I am also now longing to play the original Archimedes version of Repton 2 again. Hopefully when I get back to the UK I’ll be able to transfer some of these discs over so I can use them on Arculator.