After I created the artwork for “Repton: The Lost Realms“, Dave Moore of Retro Software asked me if I would create a loading screen for the BBC Micro and Acorn Electron versions of the game. Initially the brief was quite loose – he thought we needed a Mode 5 screen for the cassette versions and a Mode 1 screen for the disc versions. 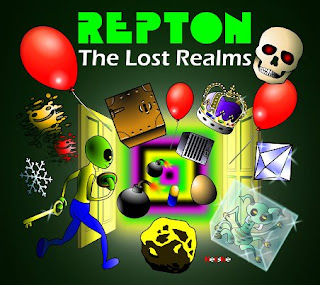 My cover artwork for Repton: The Lost Realms

On a BBC Micro or Electron, Mode 1 and Mode 5 are both four colour screen modes. The difference is that in Mode 1 the resolution is 320 x 256, whereas in Mode 5 the resolution is 160 x 256. However, both images are the same size because in Mode 5 the pixels are twice as wide as they are high. Due to its lower resolution, Mode 5 uses half the memory of Mode 1 so will load far more quickly for those using cassette recorders.

My first thought was to create the Mode 1 screen, and to use the excellent BBC Micro Image Converter software by Francis G Loch. This is an application written in PureBasic that takes image files (bmp, jpg, etc.) and downconverts them into the native screen display formats of the BBC Micro. To aid you in doing this it offers an almost bewildering array of image processing options specifically tailored for getting modern images into BBC Micro format. It can  also takes BBC Micro screen dumps and convert them to modern image formats. 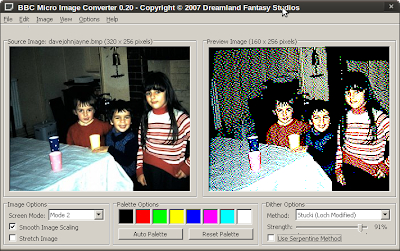 I use Ubuntu Linux, which means I have to run the Windows binary of the BBC Image Converter under WINE. I’ve found the operation of the program under WINE to be problematic if you don’t export import and output images from and to the WINE “C:Program Files” folder. It also seems happier with being fed bmp files than pngs under WINE.

Inspired by Michael “Mic” Hutchinson’s excellent loading screen for the disc version of Repton Inifinity, I decided to use the same Red, Black, White Green palette. I was very pleased by my early results – particularly the way the brown came out on the safe. However I hadn’t left any room for branding and so on. 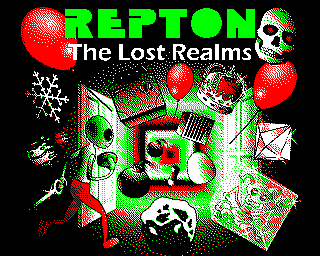 So I decided to create a version that had an area at the bottom that could be removed in the same way as the version on Repton Infinity disc for loading messages etc.

I showed Dave this version and he had a number of reservations – the main one being that the loading screen in Mode 1 didn’t really grab him at all. He wanted something more colourful for the disc version, and he suggested trying Mode 2. Mode 2 is identical to Mode 5, apart from the fact you can use eight colours.

The first thing I did was to create a screen in Inkscape that was 320 x 256 pixels that was set out exactly as I wanted to my loading screen to look. I would use this to feed into the BBC Micro Image Converter. 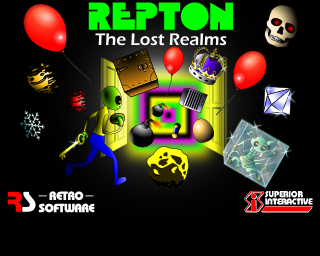 When I imported it, the results were excellent. In fact, the results were too good. Although obviously I needed to retouch here and there to tidy up the writing and the balloon strings I was overwhelmed by the feeling that really I should be producing something that was done by hand on a pixel editor – not put through some ingenious image processing we could only dream of in 1987. 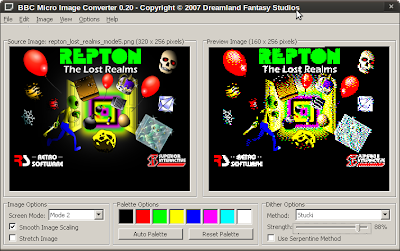 Therefore I fired up “The GIMP” and tried to add a sort of “hand designed” feel a pixel at a time. I was quite aware that what I was doing wasn’t as good as what the BBC Image Converter could produce, but the idea was to get a “retro” feel. 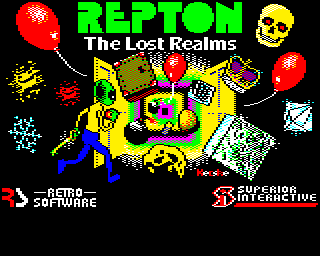 I showed Dave Moore and he was happy with the Mode 2 screen, so the next job was to produce the cassette loading screen in Mode 5.

When it came to creating a Mode 5 screen, I decided to convert the eight colour Mode 2 screen to a four colour Mode 5 screen by hand, instead of running through the BBC Image Convertor again. This was because I wanted to keep the two loading screens as close as possible to each other in appearance. 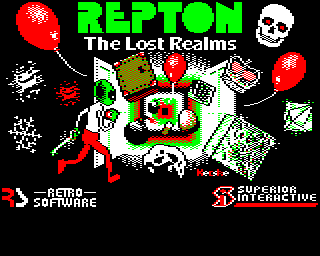 I reduced the colour depth by hand in The GIMP

Dave was happy, so that was my first two loading screens for Retro Software done and dusted.

Repton: The Lost Realms is under development by Retro Software. Repton name used by permission of Superior Interactive.

The BBC Image Converter is currently released under a non-free licence but it’s free as in beer to use for commercial or non commercial uses. You can look at a number of the PureBasic routines Francis wrote for it here.