Back in the 1980s, when I had a BBC Model B running Acorn MOS instead of a PC running Ubuntu, I used to be a very keen Repton player.

If you haven’t heard of it, Repton is an engrossing puzzle game that also contains arcade elements and it seems to appeal equally to people of all ages. My youngest daughter Mary is 6 years old and a particularly keen player.

In 1986 the third Repton game was released and it was my Christmas present from my parents that year. Although Repton 3 wasn’t my favourite Repton game (that was always Repton 2) it did allow you to design your own screens and, even better, redesign the game characters.

I soon became a keen Repton character designer, and this obsession held when I received into Repton Infinity. But I never showed my screens to anyone else at the time. I didn’t even know another BBC user with Repton! 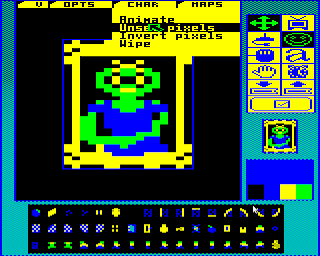 I used to particularly look forward to summer holidays and half terms when my Dad would bring home a BBC Master 128 which meant I could flip between the editor and game by pressing the break key. This small improvement speeded up designing Repton screen sets enormously.

In the middle of last year, on the Stairway To Hell forums, Acorn enthusiast Andrew Weston announced that he was putting together a website of all the non-official Repton levels that people had designed over the years. I mentioned that I had some but they were on 5.25″ floppy disc and I had no way of transferring them to a BBC Micro.

One of the forum administrators, “Samwise”, offered very kindly to transfer my discs to Emulator disc images that I could run on my PC. And, by return of post, I had my Repton 3 levels (and many other things beside) working on BeebEm on my PC.

Not all of my levels were on the discs I sent to Samwise, but the three sets with the best graphics were (some of my better level designs will have to wait for another time).

I sent the levels off to Andrew and he added them to his website and, after that, things seemed to take on a life of their own.

First came the offer from Dave Moore of Retro Software to design graphics for their forthcoming release “Repton: The Lost Realms“.

After that the person who is undoubtedly the world’s best Repton player, “Michael S. Repton”, reviewed my levels and was very kind about them indeed. Not only that, but he produced videos of him completing some of them and added them to his YouTube channel.

My aim, back in the late 80s was to design a “Round Britain Whizz” set of Repton 3 levels, with 5 sets set in different locations around the country. I designed three of the sets.

First there was a farming set based on the farm I grew up on in Somerset.

There’s the old BP oil can we had in the shed, my goat Timmy, the farmhouse, the Dutch barn, lots of barbed wire, fixing broken bails with binder twine and chasing errant cows into the right fields.

The next set was London – based on the Palace of Westminster. I always enjoyed visiting London as a child, I loved the tube and Oxford Street and the sights.

It contains lots of clichés of London – rain, American tourists, bobbies on the beat, portraits of the Queen and mugs of tea. The fungus in this set was supposed to be “the growing unemployed”.

And finally there was Rovers – based on Coronation Street. 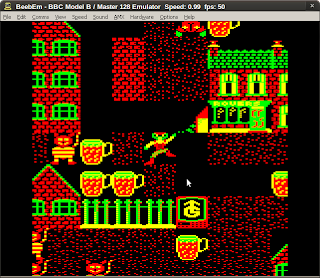 Michael also pointed out something I didn’t know – my screens had been converted to PC Repton 3 format by Richard Hanson of Superior Interactive no less! Incidentally, if you’ve never seen them, the Superior Interactive PC versions of Repton are really quite something, and are well worth anyone’s money.

The interesting thing about all this to me is that once you make your work available to others it takes on a life of its own that’s wonderful to see.

Obviously other interests and schoolwork got in the way and I never actually completed my level sets but I’m hoping that one day I’ll get the chance to go back and finish them all off. Maybe even for “Repton: The Lost Realms”.