The Acorn World show is taking place on 12-13 September 2009 and I’ve done several of bits and pieces for it. One run of the mill job was that I recreated the Acorn World logo as an .svg as organiser Dave Moore only had it as a small bitmap. 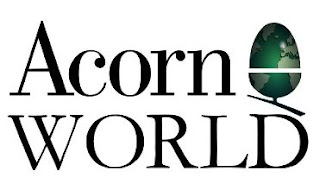 However, after that I was asked to do something a bit more unusual. Dave wanted to have a real BBC Micro show a selection of pages of information to people arriving at the show, and asked me if I could do something in teletext Mode 7.

Creating teletext graphics is quite fiddly as there are numerous limitations you have to be aware of – if I hadn’t done a lot of teletext work back in the 80s on my Beeb (mainly lame mickey takes of Ceefax and Oracle) I would have found this job tricky.

The teletext mode consists of 25 lines of 40 characters. As far as graphics work is concerned each character space is made up of a grid of 2 x 3 pixels. That gives you an effective resolution of 80 x 75 pixels. You are limited to 8 primary and secondary colours. However, each character square can only hold two colours (foreground and background) and if you want to change one of the colours (either foreground or background) you need to have a blank square to hold the colour change.

The first thing I did was take export my Acorn World logo from Inkscape as a bitmap. I imported it in The GIMP and convert it to an indexed palette consisting of black, red, green, yellow, blue, magenta, cyan and white. I already had this palette handy as it’s the standard one I use when creating BBC/Electron loading screens.

Next I reduced the size of the image to 80 pixels in width. After that I then created a grid using guides on the image spaces two pixels apart horizontally and three pixels apart vertically. This corresponded to character squares on the image, which is very important. You need to see easily where the character boundaries are in order to work out where you have blank squares in which to change colour. It also helps you create the artwork on a BBC Micro.

The first character space had to be black, as that would be where I would change the graphics colour to white. I also had to make sure that the green Acorn did not overlap any character square used by the black writing – this would have been impossible to render in a teletext mode. 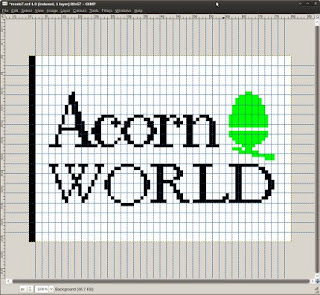 All ready to enter on a BBC Micro Emulator?

One special difficulty of this screen is that you cannot do black graphics on a white background in teletext mode on a BBC Micro (although teletext enabled TV sets can do this). You can only do white graphics on a black background. This may sound odd, but only being able to do the latter makes it much more difficult to change colours.

Next I needed to get my design into a BBC Micro. I’m not lucky enough to have a real BBC Micro here in Hungary, so I use the excellent free software BBC Micro Emulator BeebEm. Sadly, on Ubuntu Linux, I have to run the Windows version under Wine as the GNU/Linux port has been rather neglected.

Back in the 1980s I used to use a teletext editor called “Teditor” by Jim Notman that I typed in from a program listing in The Micro User (Volume 2, Issue 6). However, these days I use a program imaginatively called “Teletext Screen Editor” that I got from a link in a thread on The Stairway To Hell forum. It’s a particularly good editor as it has something called “Graphics Mode”. This means that the letters QW, AS and YX act as toggles for individual teletext pixels in a character square. This is a huge help.

When using a BBC Micro utility you really miss modern niceties like auto-saves and multiple undos! Therefore, in case of accidents I use the BeebEm “Quick Save” save state function to save my work regularly. 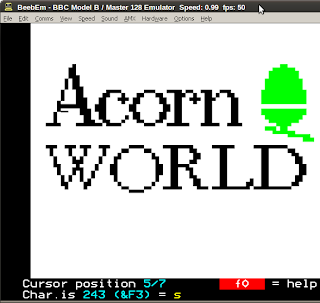 The finished result in the editor

All I have to do in the teletext editor is “type” the screen in using my GIMP image as a guide, and send off a BBC Micro disc image to Dave to load onto a real BBC Micro.