On the 12th September, Retro Software are going to release a new game for the BBC Microcomputer at the Acorn World 2009 show. The game is called “The Krystal Connection”. It was originally written by Stephen Smith back in 1986 and was going to be released by Melbourne House.

The game didn’t have a loading screen or any cover artwork, so Dave Moore of Retro Software asked me to create some.

The game is going to be released on cassette, 5.25″ disc, 3.5″ disc and also as an emulator image (for use on BeebEm, B-Em, etc.) on CD ROM. The packaging for each of these formats has a different aspect ratio; some are square, some are rectangular. This meant I had to create one piece of artwork that would be suitable each of the various formats and also work as a loading screen on the BBC Micro.

When I designed covers for Dave before I started with the packaging artwork, and then used Francis G. Loch’s BBC Image Convertor software to convert this to a loading screen. Although this produces excellent results, the trouble is that the resulting artwork looks too good – it does not have the retro feel of a piece of 80s BBC art done by hand in a pixel editor, probably using a keyboard.

I decided to start with the Mode 5 loading screen. As usual I’m working on Ubuntu Linux (Jaunty Jackalope at present), and to create the loading screen I used The GIMP (version 2.6). As well a being limited to four colours, Mode 5 is made up of 160 x 256 rectangular pixels which are twice as wide as they are high. To cope with this, I use a 2 x 1 pixel grid in The GIMP and created a custom brush that is 2 x 1 pixels in size.

For the loading screen I also have to reserve some space for the tape loading messages (I use a guide to mark out the bottom of the area I can use, which is 208 pixels from the top of the screen.

The thing I usually get wrong is perspective, so for The Krystal connection I started out by laying Paths down using The GIMP’s path tool. This allows me to get the perspective of the scene right in rough – it’s like doing a pencil sketch that you can see at any time. As you can see, I still got the perspective completely wrong! 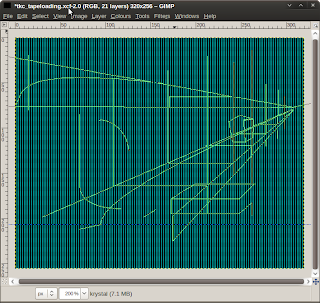 Now it was time to do the raster work, so I started with the lettering. For this, I decided to use the font Stop. I chose it because it was futuristic, and it’s also the Retro Software logo font. I added a sort of metallic effect by hand, and was pretty pleased with how it turned out. I also added a border design around the loading screen made up of crystals. I also added my name and the logo. 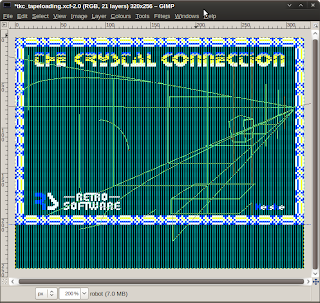 The border and logos added

Then it was basically just drawing and colouring. When I work on a loading screen I always put each individual element on its own layer so I can change my mind about the composition later. 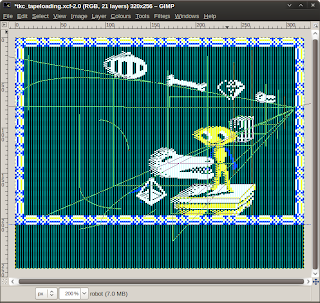 The platforms hide a multitude of sins!

This means I have a bit more work up front, as I do a lot of drawing that eventually gets “hidden”, but it means I can change my mind at any time about the composition. 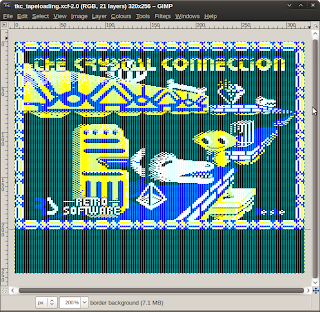 Once the Mode 5 screen was done, I had to add some colour to turn it into the Mode 2 screen. I wasn’t very happy about this, as the end result looked like a ZX Spectrum loading screen. It had a sort of “coloured in black and white look”. 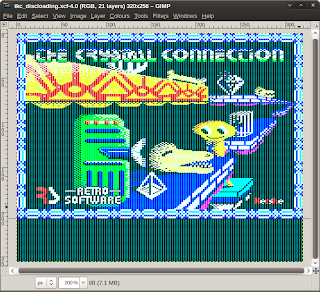 Next it was Inkscape. I was very lucky in that just before I started this project I found a copy of an early build on Inkscape 0.47, which made all the difference to the way the artwork turned out.

Inkscape 0.47 includes of a number of filters, such as bevels and specular lighting. I used these on the game’s title and was really pleased at the way it made it look.

I started the Inkscape artwork from scratch – I could have imported the paths I created in the GIMP and used them in Inkscape, but I decided that I needed to get the perspective better for the cover art so decided against it.

Unlike the cover art I did for Repton: The Lost Realms, which was cartoony with black outlines, I wanted to do something without black outlines at all. I used the Tango Icon palette (one of the standard palettes supplied in Inkscape) to create the artwork as limiting your colour palette makes life much easier. I also used the guidelines for creating Tango icons to create the artwork.

I also decided on a light source – somewhere in the middle, to the right of the viewer – early to avoid the mess I made of the artwork for the game Zap!

As in the GIMP, I drew each element on a separate layer. I also drew much more than I needed to so that I could cope with the different uses the artwork would be put to. 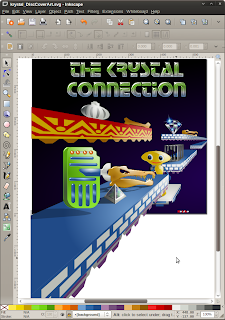 Always draw more than you need

Overall I am very pleased with the way the artwork for The Krystal Connection turned out, and hope it does the game justice. 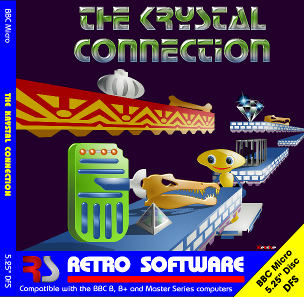 The Krystal Connection will be available from Retro Software from 12th September 2009.